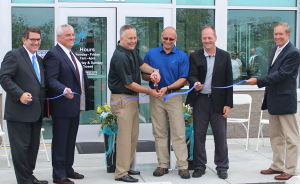 Quietflex, a manufacturer of flexible duct for the HVAC industry and fiberglass blanket applications for the automotive, natural gas and construction industries, has expanded its manufacturing operation within CenterPoint Commerce & Trade Park East.

A ribbon cutting ceremony was held on July 13 at the company’s new location at 220 Research Drive in Jenkins Township, Luzerne County.

Since 2008, the company had been located in 80,880 square feet in a Mericle Commercial Real Estate Services-developed and owned building at 285 CenterPoint Boulevard in CenterPoint East. Quietflex has expanded into 108,671 square feet in the 279,000 square foot industrial building on Research Drive recently constructed on speculation by Mericle.

Headquartered in Houston, Quietflex was founded in 1976 to meet the market demand for high-quality, affordable, flexible duct. The company is a subsidiary of Daikin North America LLC, the largest HVAC and refrigerant manufacturer in the world.

In addition to its Houston headquarters, where it operates a 400,000 square foot manufacturing plant, Quietflex also has facilities in Phoenix, Arizona and Groveland, Florida.

Mericle President Robert Mericle said one of the reasons his company began constructing the building on Research Drive was to keep pace with an increase in inquiries from local and out-of-area manufacturing companies seeking space.

“There’s been a noticeable increase in calls from manufacturers,” Mericle said. “We want to make sure we have the type of space they need so we decided to construct the Research Drive facility on speculation. We are thrilled that Quietflex has decided to be an anchor in our new building. They’ve been a great tenant.”

Hilsher said it is not uncommon for Mericle to relocate companies within its own portfolio. “Because we are always constructing new buildings on speculation, we are ready to accommodate tenants that need more space,” he said. We know our tenants’ needs, which makes it easy for us to quickly move them from one Mericle building to another.”